The Many Selves of Katherine North by Emma Geen: Review 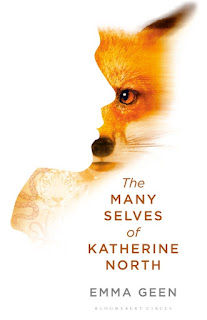 A unique look into a fascinating Sci-Fi world, 'The Many Selves of Katherine North' is an enjoyable read for not only Science Fiction lovers, but literary fiction readers looking for something different.

Kit, our protagonist, is a 'phenomenaut'. She works for ShenCorp, a research company that inserts her human consciousness into the bodies of animals they are investigating. The chapters alternate between her experiences as a phenomenaut (in one particularly interesting instalment, her mind is projected into the body of a spider), and her life on the run from ShenCorp after slowly-revealed sinister events have occurred. The novel looks at the exploitation of animals, the morally questionable grey area between scientific research and consumerism, and how human identities are moulded by the world around us.

This premise hooked me in straight away. As an animal-lover, I was excited to read a book told from the perspective of an animal. Although Kit's consciousness remains human, her personality is irrevocably shaped by the creatures whose bodies she has inhabited, and it was fascinating to observe the effect her past lives had on her narrative voice. As she remarks near the beginning of the novel, "even on a normal Come Home, there's always the sense that the world I return to should have somehow shifted, a corner of the curtain pulled back. But perhaps it's not the world that changes." Kit evolves to believe that her human body is less desirable than those of other animals, especially foxes. Her maternal relationship with a child fox Tomoko was heart-warming to read about, and effectively demonstrated the power of harmony between humans and animals.

Emma Geen's writing was evocative, but also a little clunky and overwrought for my tastes at times. Sometimes the metaphors seemed too forceful, and unfortunately fell flat for me. I wasn't particularly invested in the characters either. However, on the whole the writing was good and produced vivid imagery about the sensations one would feel living as an animal. I loved reading about Kit's life as a fox, a spider, a seal and all the other animals she is projected into.

'The Many Selves of Katherine North' was a solid 3 star read for me which I would recommend for its interesting plot and themes.

This title will be released on the 7th June 2016 by Bloomsbury
Posted by Alisha at 11:39

Alisha
Just a girl who prefers to live in the world of books than the one around her. I love fantasy, literary fiction, YA and classics, among many other genres. I endeavour to review whatever I read