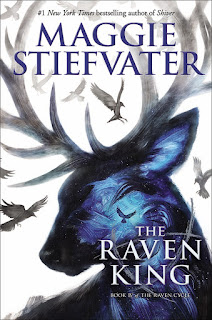 A flawed finale that ultimately left me rather unsatisfied, but was well worth the read.

Firstly, the cover was gorgeous. It summed up the magic and the dreaminess of a fantasy world very much entwined with the mystique of nature. We have the motif of ravens, which of course features prominently in a novel named 'The Raven King', and a beautifully ethereal colour scheme. And best of all, a really cool stag. Because who could say no to that?

Now we've got my drooling over the aesthetics out of the way, let's talk about the actual book.Things are taking a dark turn after Persephone's death, and the happy whimsy of previous instalments is mostly absent from 'The Raven King' (apart from some notable exceptions). A demon is amok, determined to destroy Cabeswater. Time is running out for the Raven Boys and the women of 300 Fox Way. Glendower must be found soon, or they may all pay the price.

The writing was beautifully-crafted, as one would expect from Stiefvater by now. The sickness invading Cabeswater was fantastically-evoked by her description of the black ooze poisoning the trees. At times her writing was magical and fairy-tale like, similar to Laini Taylor's style, but this didn't occur as often as in previous instalments. 'The Raven King' is more plot-driven than the other novels, and consequently the writing is written in a more abrupt, frenzied style occasionally punctuated with intensely lyrical interludes.

As I've always said, what I love most about these books is the characters. And as befitting a final novel in a series, 'The Raven King' is the crystallisation of their growth into something more, as Blue would say. Adam's evolution into a man at ease with his past, his present, and his future is one of the high-points of the series. He gradually overcomes his bitterness, his fears, and his insecurities, transforming into someone I'd want to be friends with. Gansey doesn't showcase significant development as he always had been a strong character, but the reader was given more insight into his vulnerability (the fear of his personal harbinger of death, bees). Ronan learns to accept happiness, by creating dreams rather than destroying reality. These characters are real and loveable. Maggie Stiefvater has created some of the best characterisation I've read in all my years as a reader. What did disappoint me, however, was the lack of Noah. I love Noah's character and yearned to see more of him.

The plot was where the novel fell down for me. As the novel neared the end, certain events seemed anticlimactic. The conclusion felt rushed and abrupt. I don't normally mind loose ends in a novel, but this was just too messy for me. Everything was confused and disjointed as if I'd been tossed from the whirling vortex of a tornado, rather than having simply emerged from a surreal dream. Haruki Murakami's novels have the same dream-like quality to them as Stiefvater's, and the same inconclusiveness. But the difference is Murakami gently walks you in and out of his dream-world, allowing you to come to terms with the fact you don't understand all that went on: whereas Stiefvater promptly evicts you just when you're getting somewhere.

Overall, I love The Raven Cycle as a series, and really enjoyed The Raven King as I did with all the other instalments. But I was frustrated by the messiness of the ending, which I believe could have been executed slightly better if a little more resolution had been sprinkled in.

SPOILERS- YOU HAVE BEEN WARNED: DO NOT READ ON IF YOU DO NOT WISH TO BE SPOILED


On to the juicy stuff! (A.K.A disjointed thoughts on Pynch and the warping of time)

Adam and Ronan. How could I not start off with their romance? The best part of the book was their romance finally coming to fruition. As Cabeswater's dual care-takers, they have to rely on each other to survive the evil infecting it. Throughout the series they have bonded through the enormity of the tasks they have undertaken together, and 'The Raven King' consolidates the intimacy of their relationship. It was wonderful to behold.

As I said in my review for 'Blue Lily, Lily Blue', I struggle to get my mind round time-bending concepts. And this book was one big timey-wimey stir fry. Noah's role in Gansey's death and rebirth was puzzling, but I'm glad that Noah was the one to have helped Gansey along all these years.

The abrupt gap between Blue telling Gansey to wake up after they attempt to bring him back to life, and the epilogue, did not work for me. We learn nothing of the fate of The Gray Man, of Maura and Calla, of Noah and what the others think about Noah being lost forever. We are left not knowing whether Laumonier is still out hunting for strange supernatural artefacts.We just switch to Blue, Gansey and Henry proverbially walking off into the sunset. Although I appreciated the happy image, I needed a little more of a narrative bridge between Gansey's rebirth and the trio going off travelling in their gap year.

I did love the very end of the novel, however. The final line was perfect.

Alisha
Just a girl who prefers to live in the world of books than the one around her. I love fantasy, literary fiction, YA and classics, among many other genres. I endeavour to review whatever I read